At this point in the process, my immediate goals were two-fold. Unfortunately for me, there simply is not a lot of documentation out there for the creation of SpecEvo fiction. This is by design, as most instances where a set of creatures is being created, there’s this kayfabe-like understanding that the creatures be presented as if they had been ‘discovered’, rather than designed. Indeed, writing this whole ‘About’ section is very unlike any other SpecEvo piece, and would be omitted if not for the mandates of the thesis process.

The pipeline I arrived at in terms of incorporating research into creature design was primarily the product of combining the workflow of two creatures artists with vastly different, but well documented approaches to creature design. The first is Terryl Whitlatch, whose trilogy of books of creature design serves at the key text of biologically-based creature design. However, Whitlatch’s process is entirely geared towards traditional media, which is why is is counterbalanced in my work by also drawing from creature concept artist R.J. Palmer. While a relatively new face in the concept art works, he excels at rapidly prototyping digital creature designs to high degrees of polish with a systematic, almost mathematical approach. Meshing these two processes gives a pipeline that can be expressed in this rather intimidating list.
In broad strokes, the concepting of the creature is very much Whitlatch, and the execution is very much Palmer.
Ideally, this process gives me a cyclical pipeline where each creature influences the creature that descends from it in a an organic, yet informed way.

The pipeline, in turn, informs the deliverables of the project. In order to pitch this idea before I had creatures to present, I used a placeholder creature to express my plans. That creature was the 'murp'. 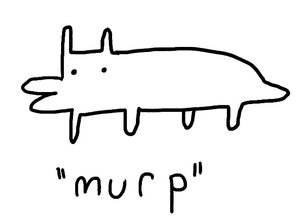 There he is!
Though it was the most ambitious in scope, I ended up going with the family tree model, because I believed it could be represent the principles I believed I could put into practice.

Time finally came to find my base creature, a creature that did exist at the time of my 'What-If' question. Our event in question, regarding the relative humidity of the world 252 million years ago, takes place right on the boundary between the Permian and Triassic, so it is commonly known as the P-T event. The dryness of the moment led to reptile dominance, so naturally, I chose to explore the possibility of amphibian dominance. Amphibians would thrive in a more humid, moist P-T event, and, indeed, until far into the development process of the thesis, I referred to the Amphiterra Project as ‘MOISTWORLD’. I still prefer the old name, but it just didn’t test well. Looking at the creatures of the time, I found my candidate: Triadobatrachus massinoti, commonly acknowledged as the most recent common ancestor  of both frogs and salamanders. I liked the idea of huge, grandiose creatures coming from something so delicate and small. And, yes, at the end of the day, I just really like frogs. In attempting to research and reconstruct Triadobatrachus, I would be experience firsthand whether my proposed pipeline would work.
Powered by