One of the ways creature in SpecEvo fiction are brought to life are illustrations. The classics of the genre, like Dougal Dixon or Wayne Barlow's oeuvres, use illustration of their creature as they would appear in life to cement the fiction that these creatures were discovered, observed and recorded, rather than being created. These illustrations take cues from the world of naturalistic animal art in the documentary style, drawing from sources like James Audobon's work to create a tableau of life. The bulk of SpecEvo fiction comes from a time before digital media, usually illustrating their creatures in detailed watercolor. My goal is to apply the techniques of modern concept art illustration to this largely dead genre to bring it part fo the way back to life, as it were.

The Amphiterra Project, in its current state, features three detailed illustrative paintings of the creatures in life. Specifically, we have Triadobatrachus guarding its eggs, splendid fraggons walking through the mist, and arctic fraggons about to engage in battle over a carcass. In this section, we'll be deconstructing the creation of one of those pieces, the arctic fraggons,created under the supervision of my thesis mentor, Richard Morgan.

For the arctic fraggon piece, I wanted to invoke a dynamic composition with depth and tension, as if an intense struggle is about to occur. My first step is to gather reference. I knew I wanted a snowy, tundra environment, and looked at pictures of wolves and polar bears for inspiration.
Based on these sources, I began developing thumbnails for the composition of my piece. 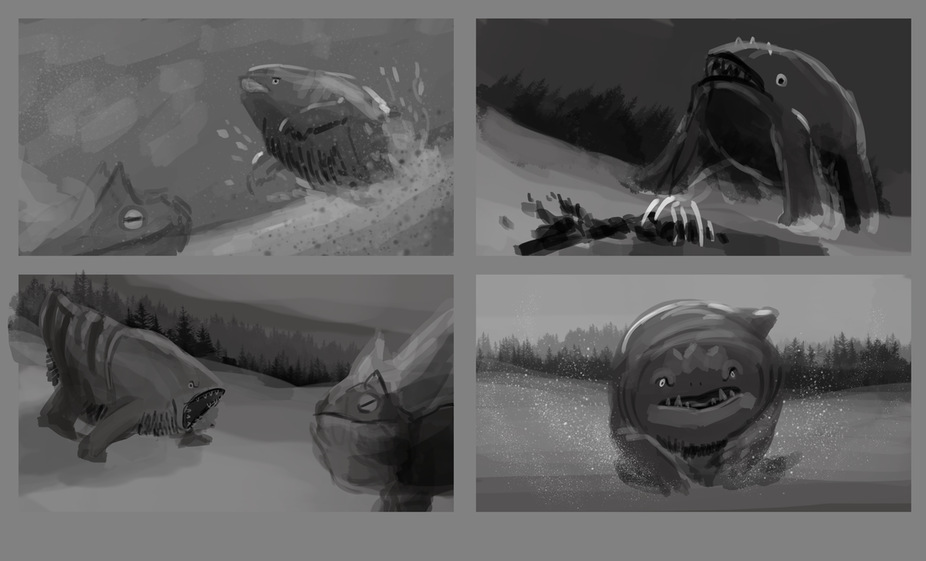 Taking what I felt to be the best elements from each composition, I sketch out a rough idea of what I had in mind. My method of sketching lets me rough out volumes, so a sense of weight and depth can be worked in early on. 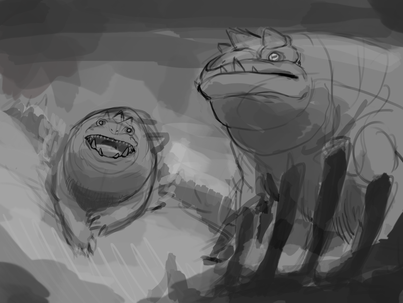 From here, I bring the piece in to Medibang Paint Pro. This software is generally more useful for sequential art than illustration, but, in my opinion, it better for producing lineart and matte shape volumes than Photoshop. 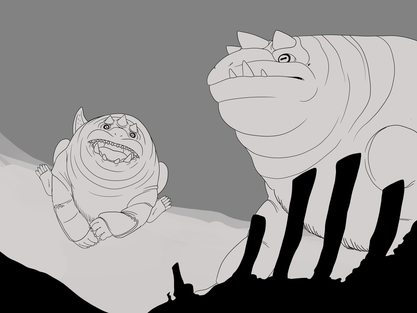 I then bring the piece back into photoshop an simply start painting. It may seem like a big jump, but from a technical aspect it's a matter of painting out the forms. Sometimes I would approach the creatures from a process similar to their orthographic process, but here, my technique isn't wildly different from a traditional source. I cribbed the lighting scheme from a piece I saw by concept artist Ryan Lang.  I felt this would give it the sense of scale an cold, arctic light I was looking for.
From here, it's a long process of textures, tweaking, filters, glow and process that I feel strongly emphasize what I can do for this piece in the digital medium that the traditional painting would not afford me. 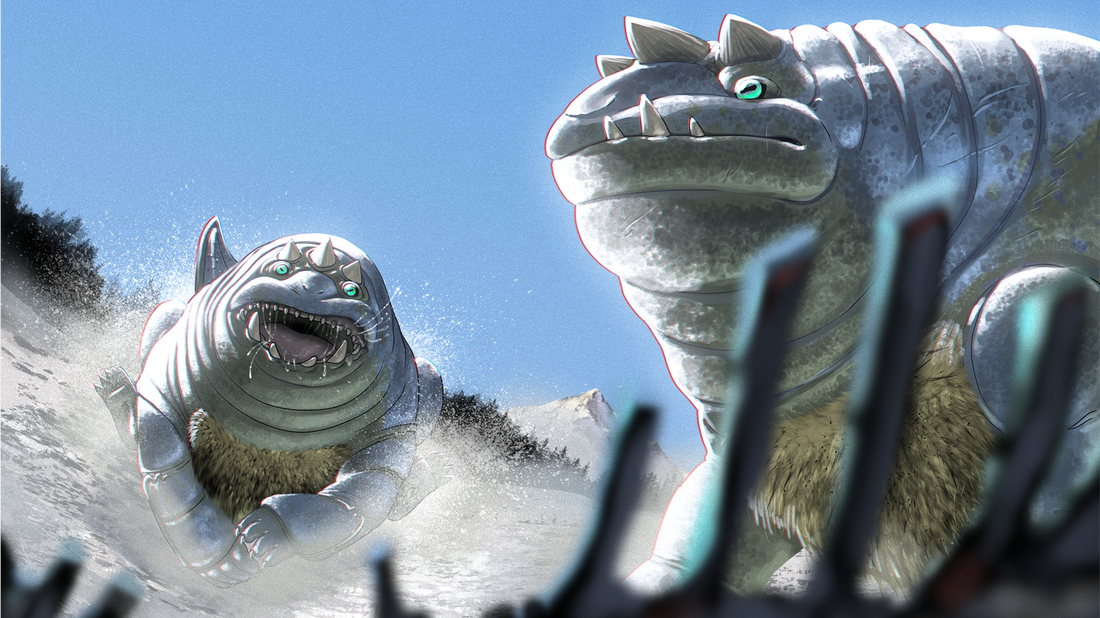 I'm very happy with the result. This piece represents one of seven 'tentpole' pieces, meant to support the thesis with their complexity and demonstration of technical mastery. Three are illustrations as detailed above, while the creation of the other four can be found on the 3D MODELING page.
Powered by