Bullpronks rule the plains as brutally efficient pack predators, hunting grazing animals in coordinated prides. The key to their teamwork is communication, made possible by the re-emergence of a neotenous trait: their characteristic ‘tadpole’ tail. A new development, the tail is not lost after the tadpole stage, but instead stiffens with muscle and sinew. The tail can be flushed with color, raised, or dropped, all as means of coordination and communication over the tall reeds of the plains. These natural flags can even be used offensively, startling a prey animal with a sudden flash of color, corralling them towards the pack.

For a creature where color plays such an important role, tail colors and patterns are very unique to a family group, easily morphing within generations, so even closely related packs will have their own unique flair. This of course plays a role in territory control and fights for dominance, where the leaders will butt crests loudly to claim hunting grounds and mating rights.

The bullpronk’s branching ‘whiskers’ are actually blood-filled dermal papillae, lined with sensors, detecting both particulates in the air and vibration. Stunningly sensitive, extended whiskers represent a bullpronk’s weak spot. To compensate for this, the whiskers and deflate and shrink into nubs during times of combat or stress.

Frogs and their descendants do not naturally have teeth on their bottom jaw, or at least teeth as we know them. As the bullpronk evolved to tackle larger and larger prey, evolution solved the issue by evolving weapons directly out of the bottom jaw. Though they seem like teeth, these protrusions are actually more akin to horns, developing a  protective layer of keratin over the more vulnerable bone, and can extend beyond their bony base, as well as have pieces broken off by stress without great injury. 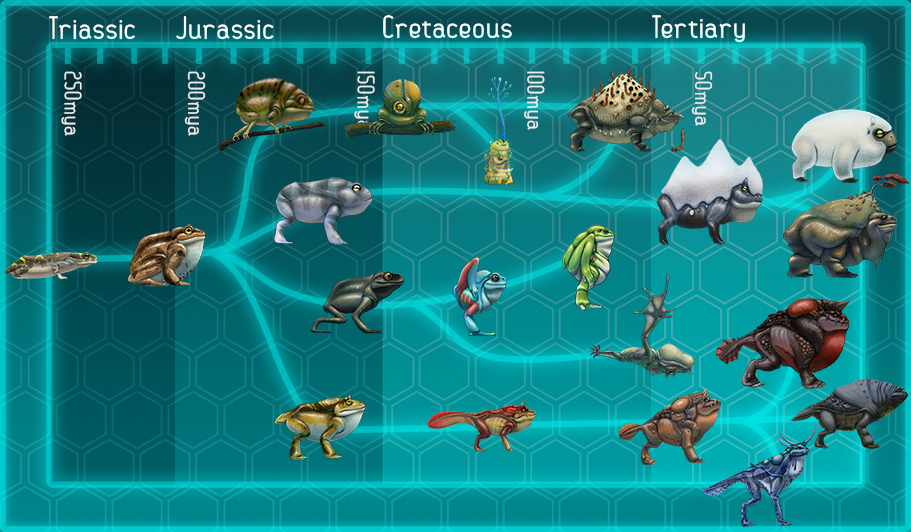